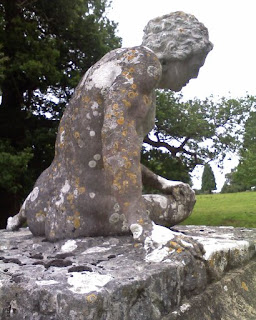 The splendid Two Rivers Press in Reading have just published Her Leafy Eye by Lesley Saunders: a collection of poems inspired by Rousham (a garden in Oxfordshire landscaped by Bridgeman and then William Kent), with illustrations by Geoff Carr, a present-day garden designer. The book launch was held at Rousham, where Geoff led an informal guided tour, and Lesley read some of the poems in situ -- for each is motivated by a particular feature, although (refreshingly) the motif generally does not constitute the subject. The poem for the 'Dying Gladiator', for instance, entitled 'Hero', apparently ignores the striking statue and instead evokes a Handel composition (1738, contemporaneous with the garden) sung, sublimely, by a castrato, 'sexless ... winged' ... And yet, it also offers a challenge to this figure of the all-male fighter, defeated by mortality, the head drooping. The singer by contrast is 'lifting his face', the voice soars 'ever-upwards' mixing into the branches of 'an oasis-tree' so that the 'clamber and whoop-calls' seem those of a daredevil boy. And on another level again, this 'angel' in the 'heavenly air' might after all offer comfort to the warrior contemplating death. (The Dormer brothers who owned Rousham and commissioned the gardens were both soldiers, and at its completion both had died.)

Great breadth and subtlety of thought and construction inform the whole collection, together with a huge sensuous energy: this is partly a matter of reference and image, stimulated no doubt by being in the fresh air with trees and water and artfully activated vistas, as well as the poet's evident acquaintance with early-mid-18th-century culture; but it also seems to spring through the language. 'The Genius Loci // would carry words like thicket and covert ...' as well as its other functions. The title of 'Acre' (an elegy for that unit of land measurement), tangles through the poem in a somewhat Muldoonian fashion: 'you can watch the earth curve' ... 'not scaring the longhorns' ... 'like the kora tuned to its own scale' and finally in the brilliant 'carpets of light'.

The illustrations, a notable feature of Two Rivers books, are very various, quite light, sometimes playful, and distinctly subordinated to the poems. One black and white image suggested a more restrained, perhaps conservative option for a more unified book, which I might have preferred; but which was evidently eschewed in favour of colour and variety, which is fine.

At Rousham, the 'sinuous rill' was a pleasing discovery, though a surprise that it's a sort of flooded tramline or mini-canal, not a Romantic stream.

A couple of weeks later, at Little Sparta: 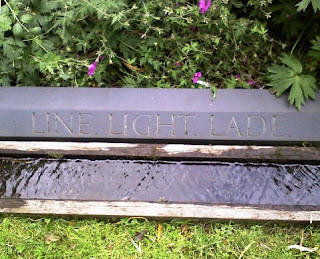 This (badly photographed) straight channel surely harks back to the Rousham rill, acknowledging the charm of its 'sleeve of silk' (Lesley Saunders, 'Rill') while adding explicit reference to the transport canal. That succession of words, ending with the heavy glide of 'lade', is a whole moral philosophy. [Just looked it up in Chambers though, and 'lade' is a mill-stream in Scots... Either way though, it's about working water?]

Obviously there is no end to what could and should be said about this amazing garden of Ian Hamilton Finlay. Can't possibly do justice right now. Actually the plants struck me this time too; the beautiful interplay of different leaves; and indeed lots of flowers, mostly wildflowers. 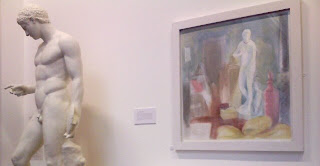 Remembering Little Sparta is a rather astonishing exhibition on in Edinburgh this month. Janet Boulton knows the garden intimately and has made many watercolour paintings of it. These are one might say subjective documentary records, presenting true views in a way unlike any photograph; and they are also really fine paintings. Not just set pieces, but behind-the-scenes storage areas. And Boulton also became a good friend of (and occasional artistic collaborator with) Finlay himself, and there are paintings too of the interior of his house; close-seeing, respectful, but in some cases quite numinous views, of his collections of model boats for instance. (My photograph -- with apologies to the artist for the poor image -- shows one of the suite of views of the interior of the Temple; and also the beautiful fitness of this exhibition being installed in the enormous Sculpture Court of the Edinburgh College of Art, with its plaster casts of classical statures and reliefs.) Nothing anecdotal or biographical; no people.

There are also works in paper relief, an unusual medium that Boulton has made her own, in which she meditates upon and responds to Finlay's work in a more like-for-like way, rather than by re-representing it. Likewise she has installed sculptures and inscriptions in her own small and lovely garden (there's an account in the magazine The English Garden, Sept. 2006), with references and homages from her distinct artistic lineage -- to the Cubists in particular, for instance. And then there is an actual group of Finlay's precious boats in the room, some letters and ephemera, and -- real treasures -- some of the little painted wooden toys he made in the 1960s. All in all, not to be missed; but even for those who can't get to Edinburgh there's an excellent catalogue, and images on the artist's website: click first link, above.

Finally, one for the gladiator: 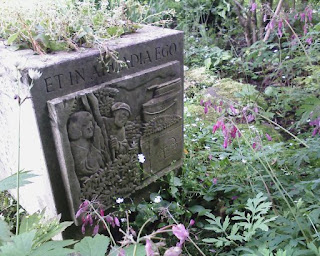